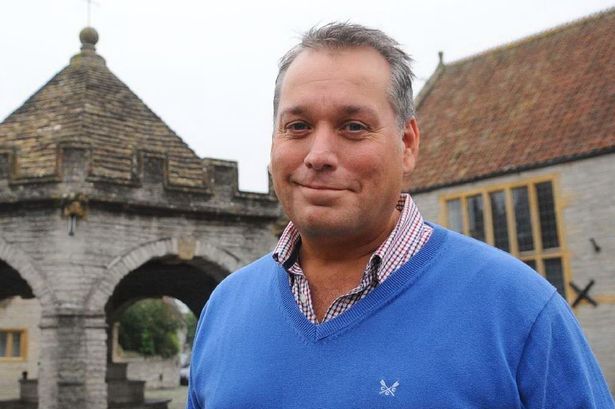 David Warburton got expelled from school, well, “told not to return”, he says, with a bright smile as we sit talking at the Garden Cafe in Frome, Somerset.

It’s one of those strange sun-rain-sun-rain-sun-hailstone days but the market is still full and people walk slowly past the window.

As we look out Warburton talks about his experience returning to education despite that early trouble, becoming a teacher at a place the Evening Standard called “London’s worst school.”

Somerton and Frome’s prospective Conservative MP had been at the Royal College of Music before he began teaching, studying classical music composition and piano, which led to smokey piano bars, working at Our Price Records and, strangely, selling sandwiches door to door.

His experience with education, then, is almost as unique as Frome’s middle school system, wherein students attend three schools between the ages of 5 and 14 years old. That system, Warburton says, “works really well,” and the final destination for all students, Frome College, with 14-18 year olds, is doing a “great job connecting with the community in loads of different ways.”

It has been ten minutes and he is already launching into an idea linking a post-16 group, Edventure, with a Yeovil based housing group.

“Edventure are looking for houses to do up, so participants can be trained in a number of ways, and Yarlington have some run down houses, so I’m trying to bring them together.”

It is this ‘bringing together’ that much of our conversation draws back to, circling around the idea of building mutually beneficial relationships throughout the Somerton and Frome district.

It is not surprising, then, that he made the bulk of his money connecting the dots not everyone else could necessarily see.

Mr Warburton was a music teacher when polythonic ringtones suddenly took over the country, with ‘crazy frog’ spreading like a virus through playgrounds all over the land.

Noting the popularity of what today seems like a benign technology, he started composing popular songs in polyphonic form and built a website with a pay wall that gave users access to his catalogue.

From there the business grew until he sold up and moved down to Somerset a decade ago, buying a house ‘in a cloud’ on the Mendips before moving into Frome recently.

The last two of his ten years in the area have been spent meeting representatives of organisations, charities and institutions in the area, as well as the people.

All in an attempt to become Somerton and Frome’s next Member of Parliament.

“But what if you lose,” I ask. “Will you continue in Politics?”

“God knows,” he says. “Everything after the election is a complete blur. Although I would have to put the last two years of experience to good use. I feel like I really can help the area now.”

These are important issues and he has been all over the local press with senior Conservative officials talking about solutions, a concept some MP’s seems allergic to. Answers.

He is especially keen to link Frome directly with London through rail, while also calling the fact there is no stop between Castle Cary and Taunton “completely barmy.”

Plans to re-open a station at Somerton are right at the top of the list, he says.

There is no question that Warburton has a good understanding of the area’s needs, but there is something about him I can’t quite work out.

After mentioning a distaste for “attacking and divisional politics,” I wonder why he didn’t stand as an Independent.

“Because I do agree with the fundamental Conservative values of responsibility, opportunity for everyone and having something to aim for,” he said.

“But then I’m not stamped as a Tory. If I were to be elected then the first thing I would do would be to ask David Heath if he would sit down for chat about the area, and his views on the issues we have.”

One thing Warburton knows, he says, is that Somerton and Frome needs a loud voice in the House of Commons, particularly with London growing as it is into a city-state.

Locals will argue that the government has recently proven, with flooding, that they take little notice of the south west until tragedy strikes. David Heath claimed to have hounded the government for years before the devastation last year, further giving strength to this argument of isolation.

And, taking into account the general consensus that MPs hold their power primarily in lobbying local companies for their constituents, I ask Warburton what he thinks should be done about Saxonvale, a development site that has been empty for almost 30 years.

Recently a supermarket and shops proposal was thrown out by the local council, something he says was good because such faceless developments “aren’t Frome.”

The reality about Saxonvale is that “nobody knows,” although Warburton favours making it into a “Solar Power Extravaganza” in which far larger sums of national funding can be gained by implementing solar technology into the build. Subsequently allowing a more ambitious project than Trowbridge .20.

Whoever gets elected in May will have to address this issue head on.

Another major development in Somerset, Hinckley Point Nuclear Power Station, is “great for Somerset,” according to the Conservative PPC for Somerton and Frome. He believes the new reactor is “essential” if we are to keep the lights on in Britain, while the 25,000 new local jobs will be a huge positive for the area.

This is in favour of what he calls “pointless” singular wind turbines that produce little electricity and only benefit the landowners. Fracking is also “not the real solution” to our energy needs, particularly, he says, because of the fears around its effect on the environment and housing prices around the area.

Most of the exploratory licenses have been in the Mendips hills although no fracking is expected to go ahead, according to David Heath MP.

What will be going ahead, though, is an election in Somerton and Frome that hasn’t been so open in almost 20 years, and the Conservative Party have an able candidate that may just win.

The main issue may be the legacy David Heath has left,  which is a constituency favourable to more liberal ideas than Warburton’s Tory stamp.